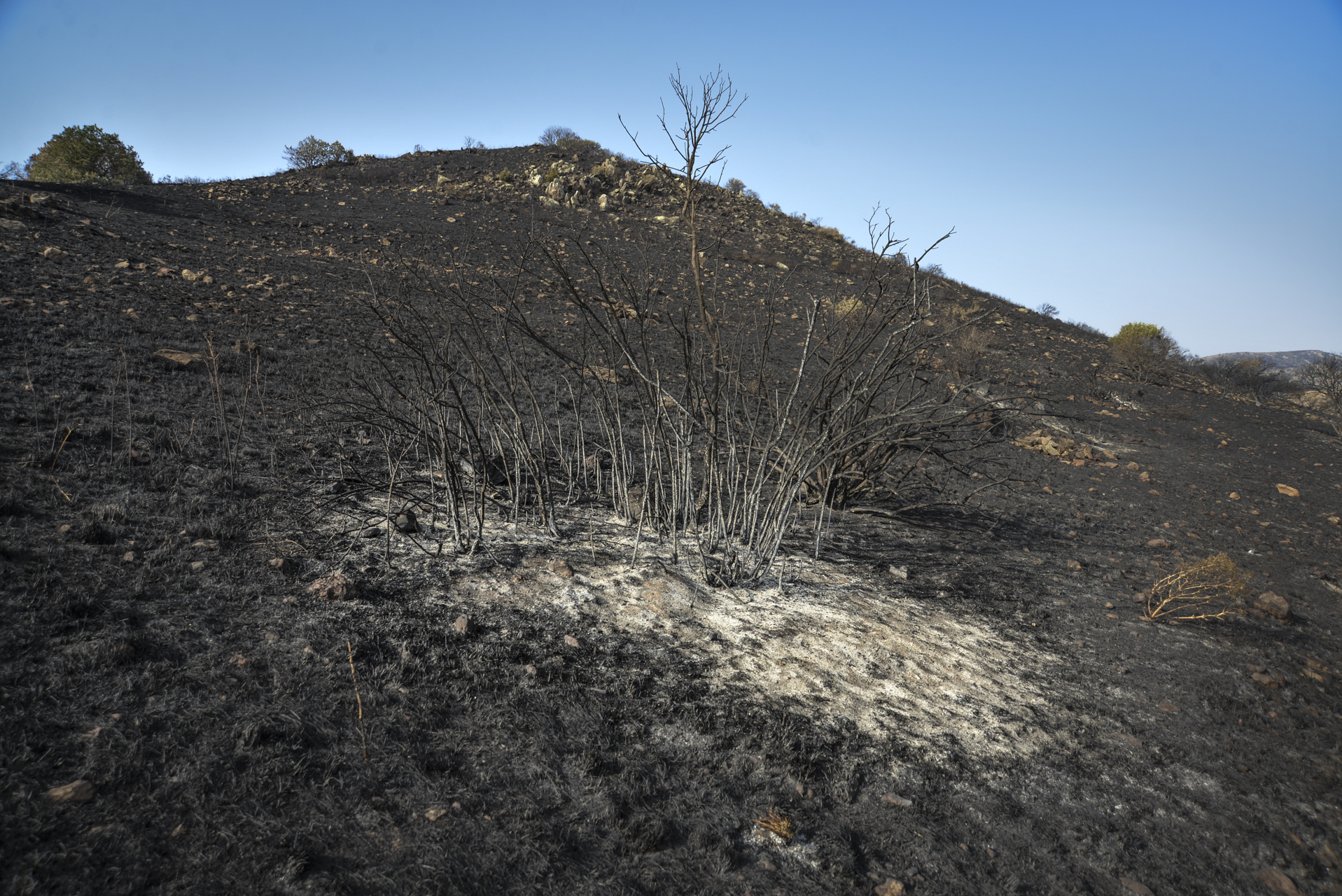 In August of 2017 Khosrov Forest State Reserve saw the biggest fire in its history. According to the official data 2500-3000 hectares of the forest burnt, in other words 10% of the Reserve. Much damage was done to the forest’s ecosystem – endemic trees and bushes, insects and plants. The fire had unleashed in the site of Khachadzor. Even after two years of the fire one’s hands get stained of the burnt out remnants

A child was born that day

29-year-old Arthur Danielyan lives with his big family in the village of Taperakan of Ararat region. It’s already four years he works in Khosrov Forest State Reserve 40 km away from their village. His father also worked there.

Before working in Khosrov Reserve he used to go to Russia to work. When he made the decision of marrying, he didn’t go any more. Arthur and Ani have two sons already, but their plans do not stop here, as well as the story. Neither they, nor those extinguishing the fire will forget the birth of their elder son. 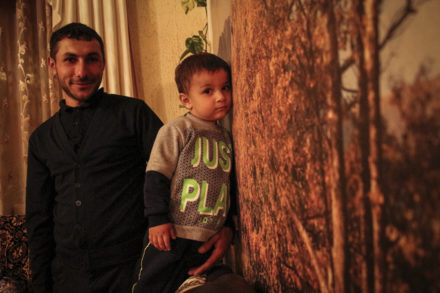 His son was born on August 15, 2017, on the fourth day of the fire. Arthur saw his child when he was three days old. Their next meeting was after 15 days.
Though the fire lasted for four days, the workers of the Reserve continued to fulfill enhanced control for another month. They were extinguishing the smallest fire sparks.
I didn’t expect that would happen that day. He was born 15 days earlier. Doctors had expected him to be born until September 5. On that day we were talking in the forest while eating, my friend said go down, your son was born, the news had arrived. I said don’t say that, only not today, it is the hardest day of the fire. When we went down that day, the guys welcomed us with applause. It was not only me, there were many guys who had celebrations in their families, something had happened, and they needed to go, but they didn’t go. Well, it’s a collective, if one doesn’t go, the others don’t go either. 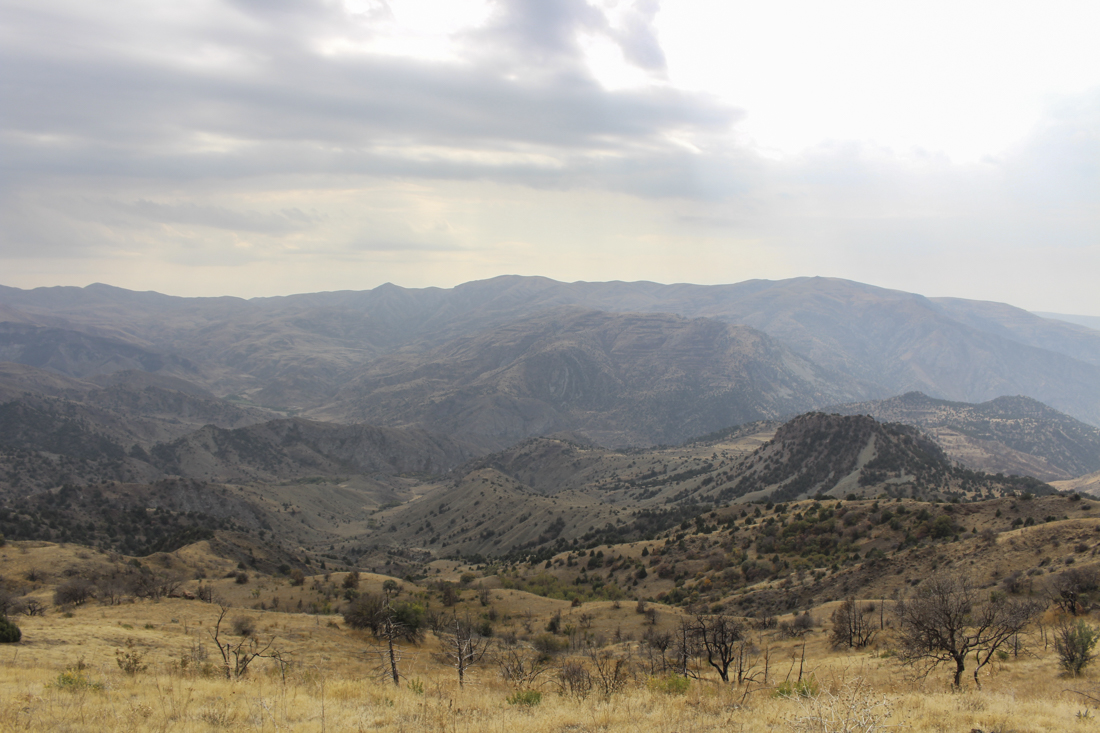 The Powers Extinguishing the Fire

There were several basic reasons for the fire to spread – the high temperature, the dry grass, the difficult relief, the lack of technical means and water.

In those days firemen-rescuers, the workers of the Reserve, the residents of the communities nearby, the soldiers of Ararat DM army base worked in the burning forest. The minister of Environment Artsvik Minasyan and the minister of Emergency Situations Davit Tonoyan were also there. Human power seemed to be helpless in such conditions…

To the extinguishing of the fire helped the rain falling on the fifth day, or the Russian airplane, or maybe both: the opinions of the specialists divide here. Though MES used to say that they controlled the situation and there was no need of volunteers, the fire didn’t extinguish either. There was much worry, and there arrived five volunteers from Yerevan to Khosrov on the third day. 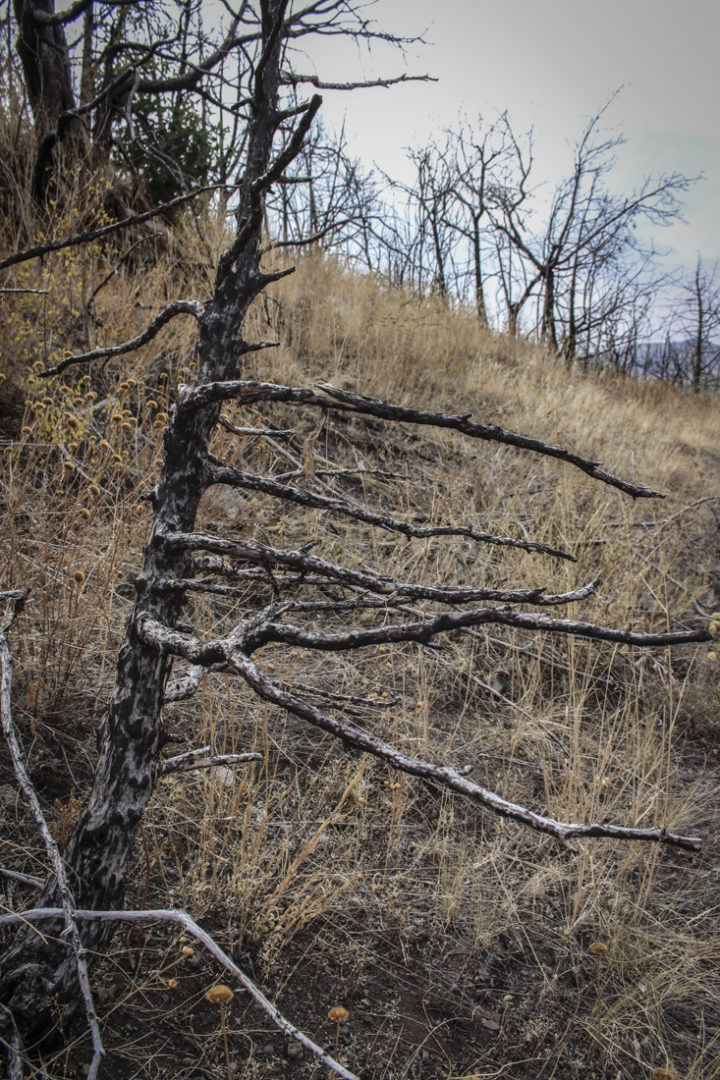 Ani Khachatryan was one of them, even more, she was the only woman working there.

She describes August 14 of 2017 with the word “hell”: the 100-200-year-old trees were burning like matches, the insects fleeing in panic made an impression of a moving ground. These were added by the heat, the warmth of the fire, the difficulty of the relief. She says that there was a lack of uniforms, also a lack of knowledge, in some cases also of empathy. 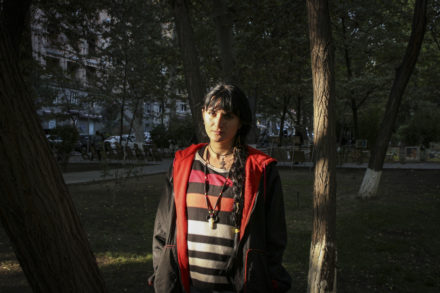 33-year-old Ani has always gone to Khosrov for the sake of Khosrov, besides the previous year. She was there before the fire, when the former prime minister Hovik Abrahamyan was making some construction there, or when there was a hunting of Gray bear and Bezoar goat registered in the Red Book of Armenia.
“You had to keep yourself standing on a rather steep slope and do something meanwhile. At the end of the day my knees were aching so badly, that we were kneeled in front of the fire,” says Ani.

We were coming from Georgia and we learnt that there was fire in Artavan which had just begun. Then two days went away, and fire ignited in Khosrov. But they told us about it so indifferently, that we thought that it was just a small fire which they had already put out. After two days we learnt that the fire in Khosrov still continued, we got worried and understood that it was serious. Then the workers of the Reserve called us and said not to listen to MES, that there was a need of volunteers, if you want to come, just get up and come. We reached there and understood that the situation was very bad. We had reached early, to go to the fire as soon as we could, but they were reluctant and not hurrying, which was absurd for me, because I wanted to get there as soon as I could, because every minute was valuable.
We were getting there very long, there were burnt out territories along the whole road, it was awful. They had dropped cement sacks from helicopters to extinguish, but they had no effect, they had fallen down and just torn a bit. No car reached there, they had brought soldiers. Those soldiers were carrying 25 kg, 20 litres things on their shoulders. Everything was extremely unorganized, and there was an extreme lack of technical means. There was also a lack of knowledge, because people didn’t know what to do. 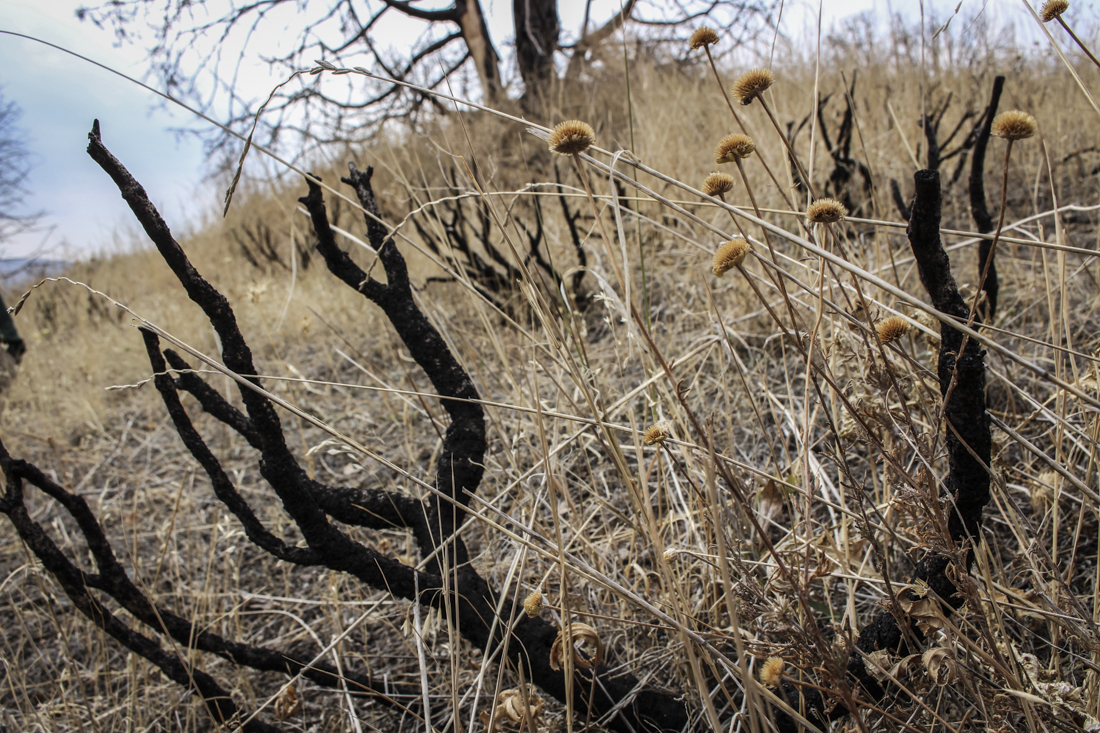 WWF Armenia Environmental Projects’ director Arsen Gasparyan says that the forest fires in Armenia are mostly anthropogenic. Thus, he thinks that more attention must be paid to preventing and quick response.

He offers to use the voluntary power of the place. “Those people who live near the forest know the forest paths better. If they have the minimal necessary equipment and are paid minimally, we will have small groups of quick response in each location, which will be able to reach quickly, and will be more attentive.”

In the days of the fire, the residents of nearby communities were there, helped voluntarily, but there were also those who knew the forest well, but had decided not to come.

45-year-old Hamlet Ghazaryan is one of the former inspectors of the Reserve. He explains that the public land and that of the Reserve are not precisely marked. Those entering here for working on the land use also the forest. The problem is that the control is not precise either: some people were allowed into the forest, the others were not. Some entered clandestinely. 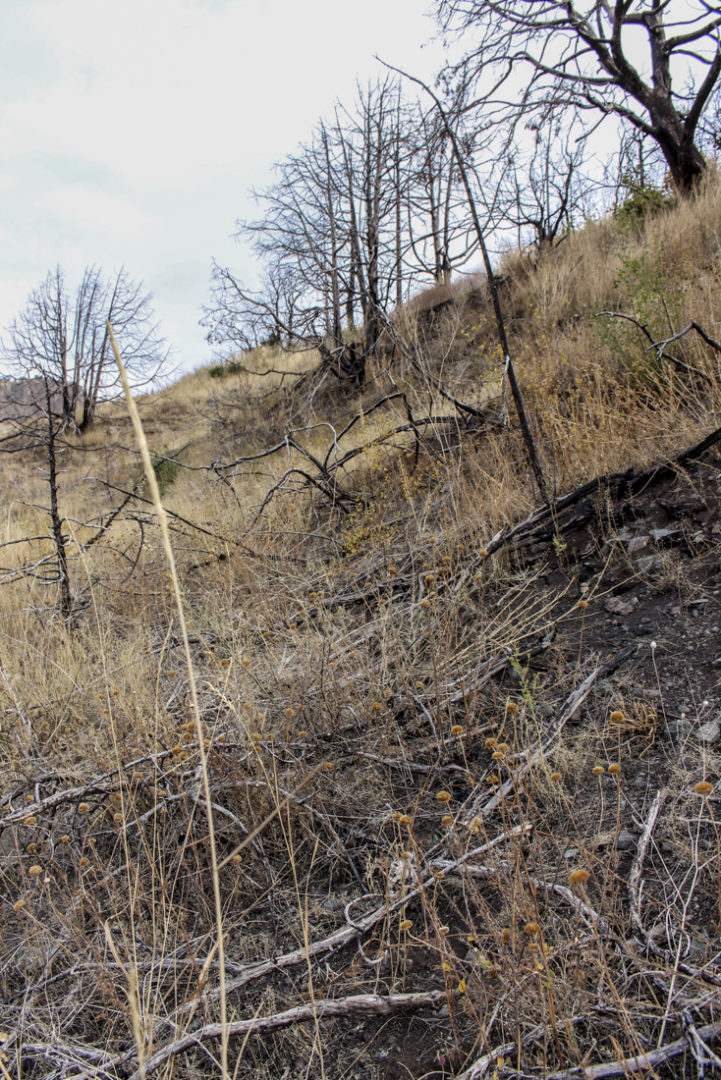 If the forest catches fire, it is the residents of the village of Urtsadzor that participate in its works of extinguishing. If they upset them, then many people reject to go to help. Of course, many went, but when they upset people, either they deprive them from something or don’t let them enter the forest to take something, on the whole, one needs to go. Of course, human factor is wrong, but one can enter the forest, it depends which territories, because there are areas in the forest which are not in the map, they belong to the communities, to Pokr Vedi community, Vosketap community. There are areas where people are occupied with farming also.

The first to reach the emergency site were the workers of the Reserve. One of them was Tigran Andreasyan. He was then the inspector of the special detachment of the Reserve, now he is the Conservation Officer of “Foundation for the Preservation of Wildlife and Cultural Assets.”

Tigran was at work on the day of the fire, he reached the fire center in half an hour after the fire. After several hours it was clear to him that the fire will grow. “There was wind in those hours, the fire was spreading with the speed of a man’s run. The fire had reached such places, that it was not possible to work,” says 48-year-old Tigran.

He has made his own calculations of the forest’s damage – approximately 3000-4000 hectares. He also explains this “The territory of Khosrov covered with forests is ten-something percent, and the burnt territory is 10% of the Reserve, but the territory covered with burnt down forests is, I would say, 50%.”

According to the evaluations the main victim of the Khosrov Reserve was one of the most valuable trees, juniper. This species burns down very quickly because of the rich essential oils in it. 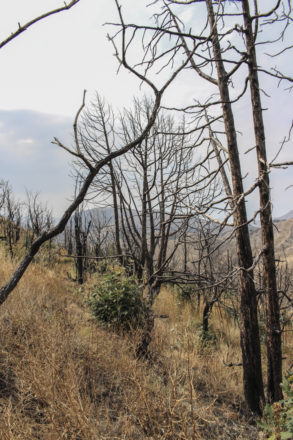 Arsen Gasparyan from WWF Armenia explains, that juniper is a very slowly growing species, and in the conditions of climate change it’s not a fact that it will grow again. The specialist also explains the much discussed thesis that the forest has regrown after the fire. “The nature can respond very quickly after the fire, some species of flowers, grasses can grow vastly, etc, but it does not mean that the ecosystem has recovered.”

The question as what was the reason of the fire hovers in the air until now. Though the Investigative Committee has closed the case and concluded that the fire has ignited from the self-ignition of the dry grass, there are doubtful articles in the media, and the whispers of the villages nearby do not cease, that the fire was anthropogenic. There were even haystacks near the fire center on the day of the fire. 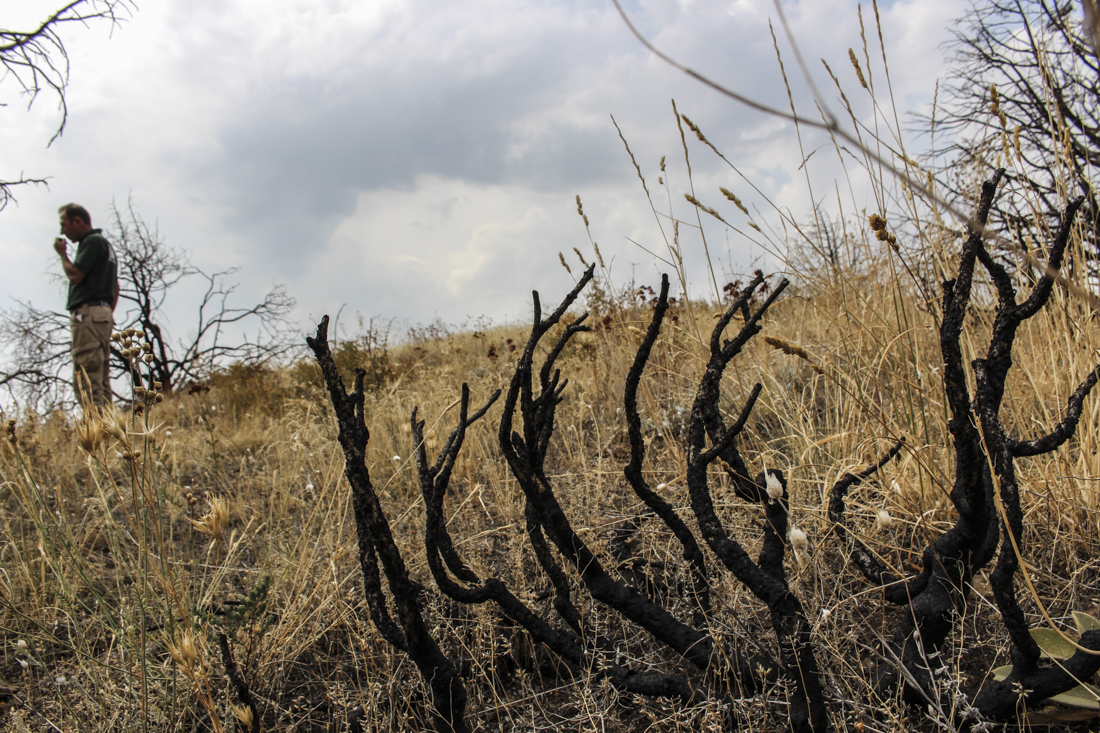 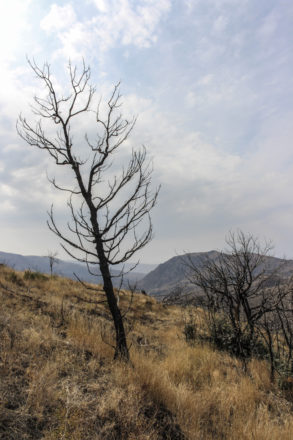 Tigran Andreasyan insists that juniper will not recover, even more, the structure of the forest will change, other trees will grow instead of juniper.

I have seen many fires, I have participated in all the fire extinguishing processes of the Reserve, but the fire of 2017 was awful.

40 degrees heat, territories with lush plants. It was very hard to struggle with the fire.
I have lived through those moments many times. One can sit and cry because of powerlessness. For example, during the fire the guys are organized to extinguish it. One blows water with pumps from behind, another one comes from behind to extinguish any small sparks, he steps on them to put them out, it goes like this, you go up for one km, you are glad for that, but suddenly the wind blows, or from somewhere a spark, and the territory you have extinguished ignites again, you become powerless. You don’t know what to do because of that. 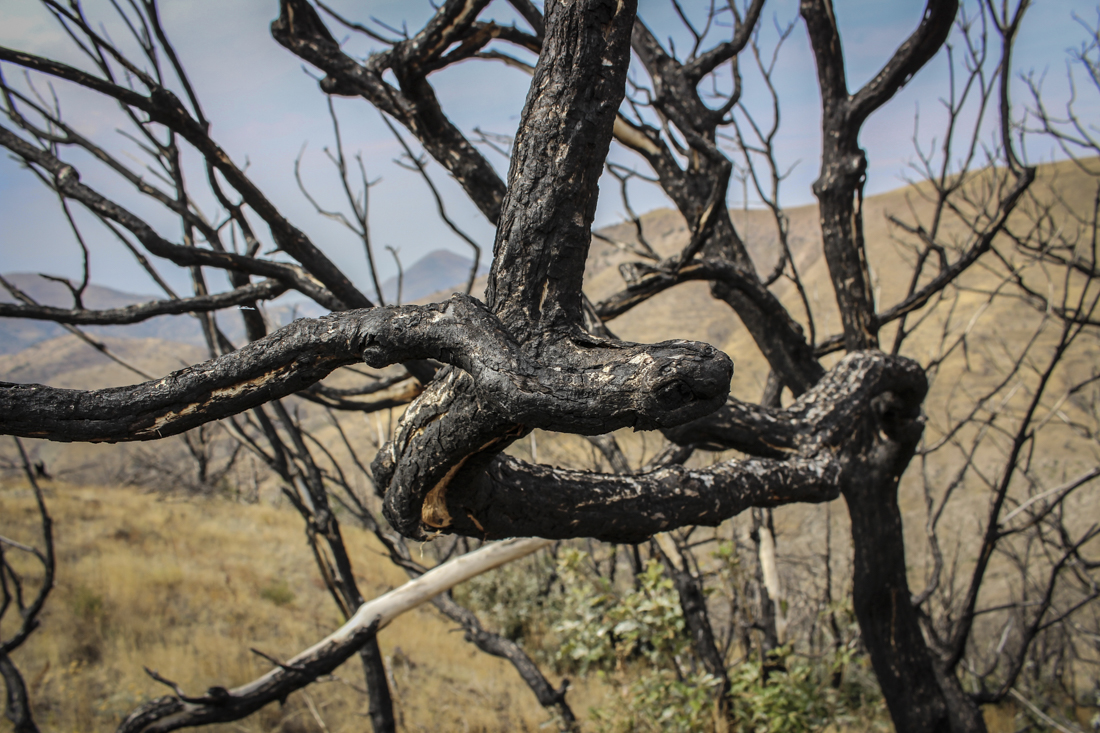 The cover photo was provided by «WWF Armenia», video materials are property of «Armenian Ecological Front».