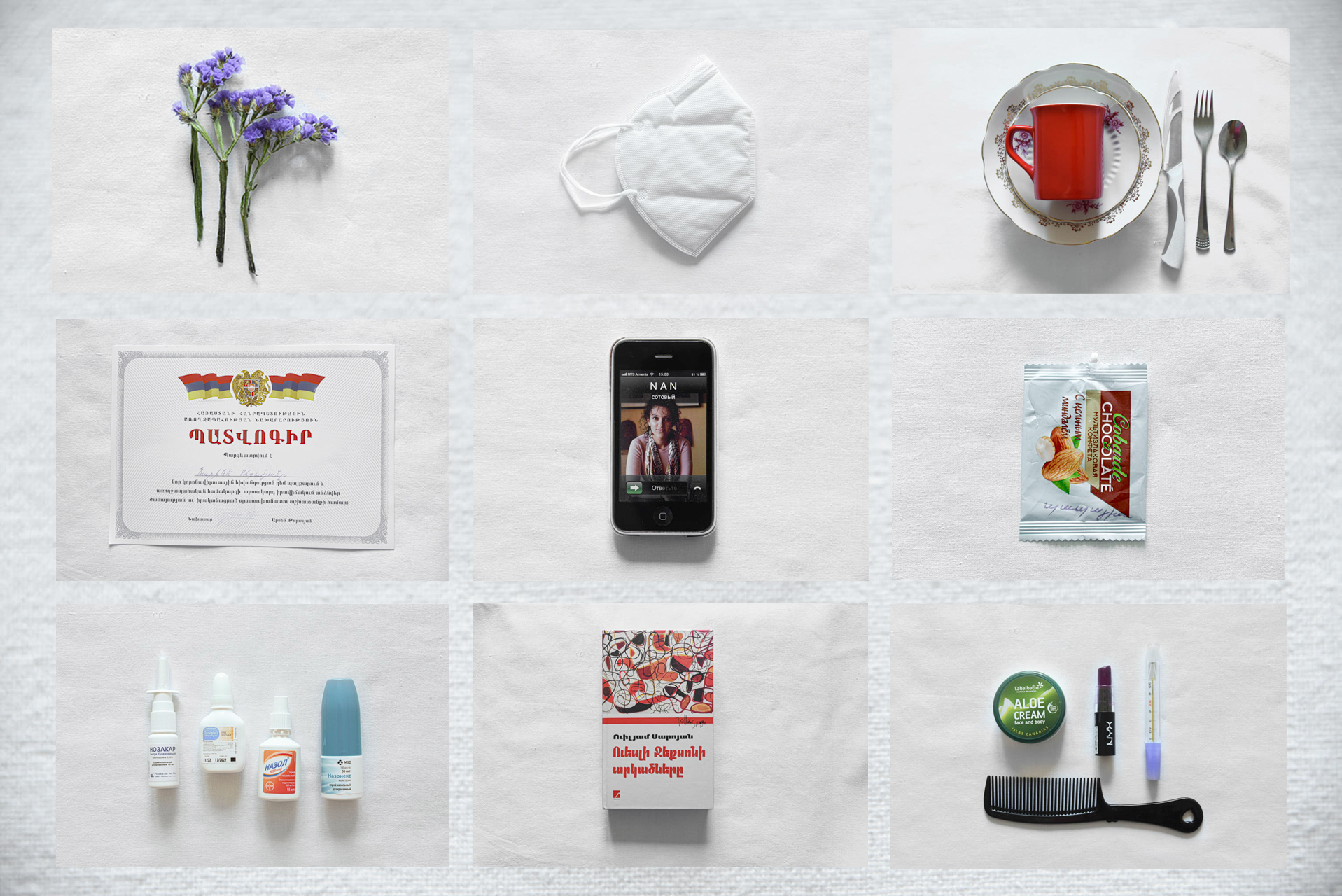 There is no beginning to this story. I didn’t photograph. I didn’t write. It was hard. It’s hard for me now, too, when I re-feel it. It was even harder on the morning of April 21 when we sent her off to “Saint Gregory the Illuminator” Medical Center. COVID-19. Infection. Death. Fear. Waiting. Uncertainty… The house felt empty without her.

Dad is always scared when one of us isn’t at home, when the house gets empty. This time we were all scared. We were scared when Narine was calling, and we were even more scared when she was not calling. We only knew that we had to wait, and she will call when she has time, or when she isn’t asleep. We were waiting, counting the living, the dead, and then the recovered. We lost and found ourselves amidst her calls.

Here are our correspondence screens as small testimonies, live documents from the days of the epidemic. Everything happened via messenger: video call, chat. As soon as the green light in the window went on, the red alarm signal went out. This was our dark room, the kitchen, where we shared everything: household, worries, daily activities. I chose the letters Narine sent me. 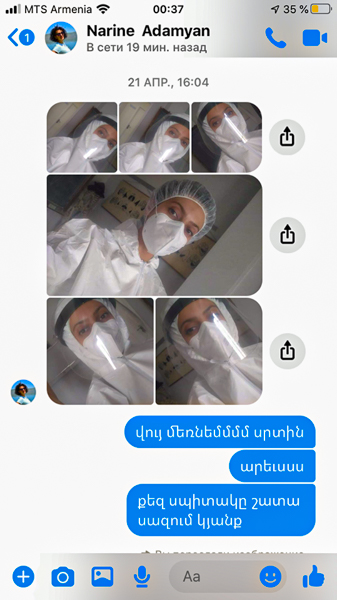 Now, a few months later, as I try to recreate the chronicle of those days, I want the photos to tell not about COVID but about life, about love, about hope, about the human. But also to tell about the invisible side of the epidemic through a person, through his emotional experience. In this case my sister was the transmitter according to whom human feelings behind the epidemic remained veiled.

When Narine came home on June 21, everything was the same and not the same. It seemed that we knew everything, that she told us everything – about when she woke up, when she went to bed, what she ate, where she spent the night, how many times a day she disinfected her hands, how many patients she had, how many times she measured their and her body temperature. But that was what was visible from the outside. We knew little about the inside. The only thing we knew was that it’s a short break during which she wants to recover. I decided to photograph that very transition, the process of recovery, the change, because at home Narine was already silent, just like a soldier who came home from the army, who is being cherished, fed and isn’t asked unnecessary questions. 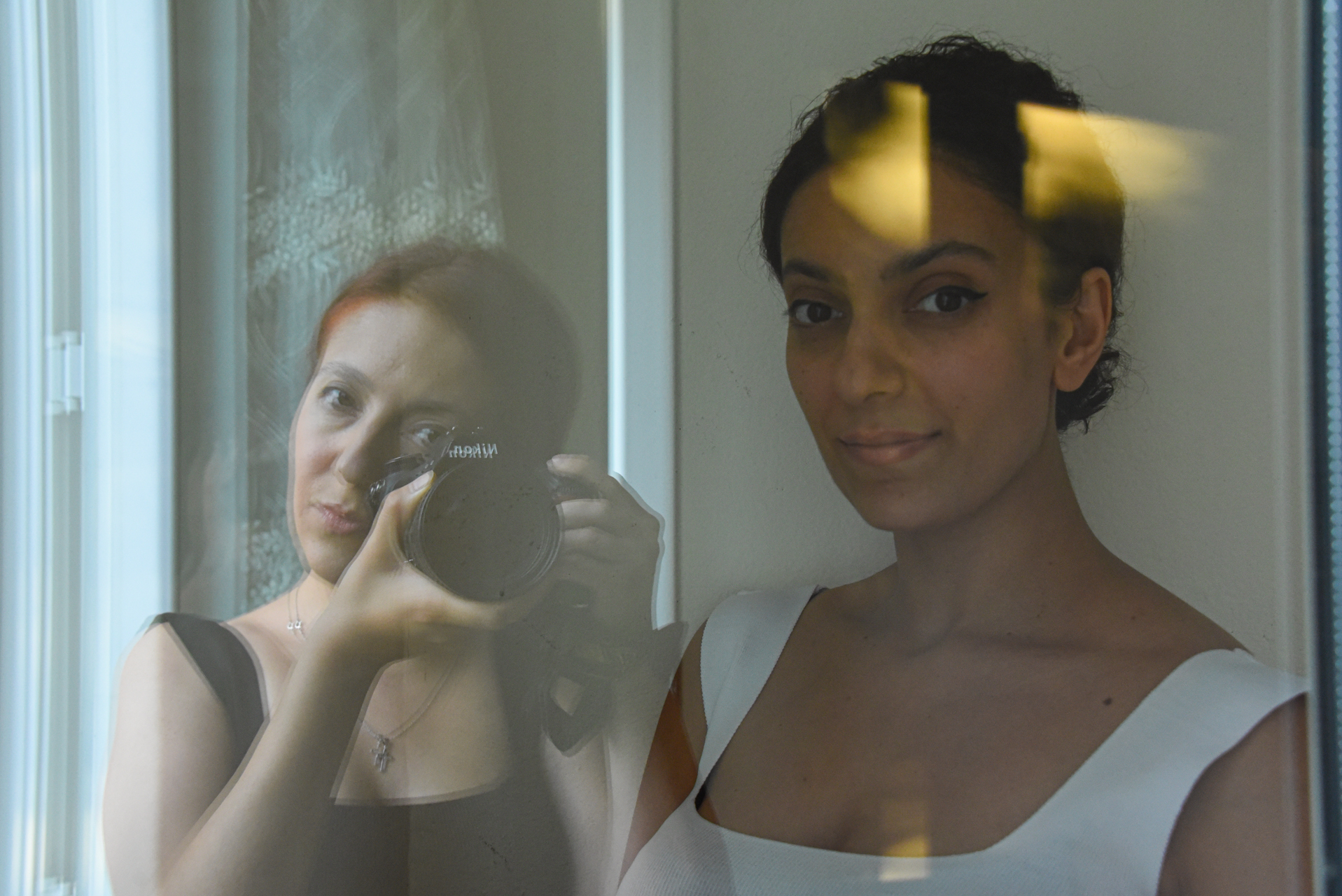 I wanted to photograph Narine without heroizing her, just as she is – strong in her decisions, fragile in her emotions, striving for the maximum, but also satisfied with a little. I wanted the pictures not just to show a beautiful girl but someone who has a character and a strong sense of responsibility.

I became a photographer for my sister, and although the roles were clear, it took time to adapt, to accept, not to notice the camera, and also to talk. Sometimes she got excited during the recordings, took long breaks. We were more than sisters then. 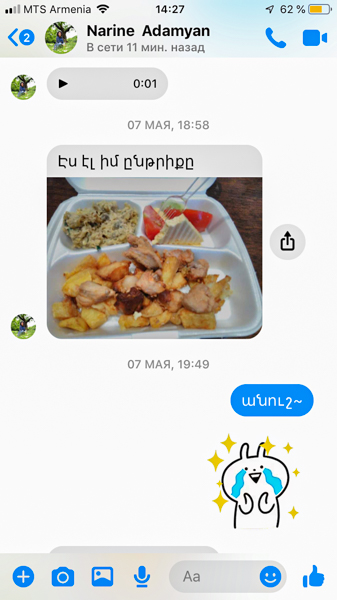 The first difficulty was to prepare myself mentally, pack up and leave the house. Moreover, you go for an indefinite period and can’t return whenever you want. It’s difficult to face something invisible that you have to protect yourself from.
At the hospital, we all seemed to be in the same boat where it was impossible without mutual support. You are constantly in touch, the walkie-talkie is on, because every minute a new stream of patients is coming. A state of high mobilization, where your quick response is important. You become a link in the chain, which in case of getting infected leads to inevitable chain reaction. It is here that you realize the extent of your personal responsibility.

At first there were more alarming situations, I could go back and analyze whether I took off my uniform correctly, disinfected my hands after the X-ray or maybe I did something unsafe that I don’t remember now. Sometimes we measured our body temperature several times an hour. And if suddenly one’s temperature rose to 36.9, panic was breaking out. We were panicked when we learned that more people from the medical staff were infected. So you realized that even if you wear protective clothing you are not protected because you can get infected not from a patient but from a colleague․ And you went back in your mind again, starting to remember the details of when you communicated, under what conditions, trying to guess whether you would be the next one or not.

During the communication with the patients I tried to inspire them in every way, to say, for example, that they are already in good condition, and that they look recovered. No one was ready to spend that much time in the hospital, and no one expected that the course of the disease can be so severe. They kept asking when they were going to be discharged from hospital and go home. There were even people who simply could not speak because every breath was possible with the help of a breathing machine. 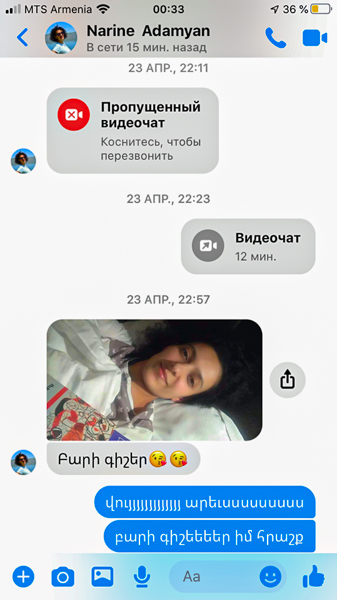 In the hospital, when you encounter deaths, you inevitably realize the fact of your death, the possible death of your loved ones… And at the level of action for a woman, it can also be the fear of aging, which can force you to take action to stay young as long as possible. Taking care of your body, going to a beauty salon, all of this is aimed at getting old late and somehow fighting against your death. And a counterbalance to death can only be the fullness of the days you lived. If a person is satisfied with his life he won’t be afraid that he will die one day because you understand: the life you lived was worth it.

I realized that I undertook a very important mission during these difficult days: I serve, I help people, and at that time my life made sense with that. That is, if you know for the sake of “what”, you can take any “how”.
But there was an impression that we live in parallel realities: people who lived a normal life, and us, whose normal lives were disrupted. A feeling that life is passing by you, the time is slowing down. If I was to title the period following that time, I would say hurry to live, because afterwards you try to make up for everything you missed during that time. And during that time the emotions, feelings, sensations, experiences, the feeling of enjoying life were missing the most. 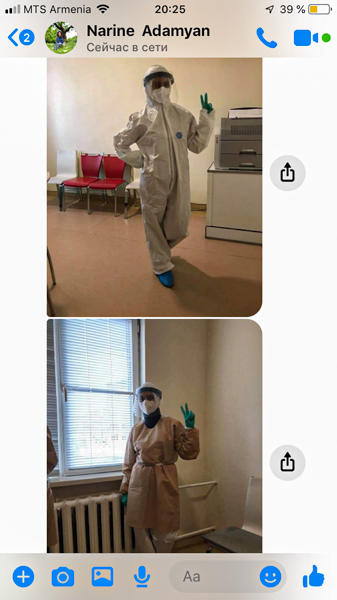 It is very important to realize your inner borders: can your psyche still handle the burden that is placed on it? One day I talked to the head of the department and said that it was time for me to go on vacation. I have become very irritable and nervous, and if I continue to work like this I may harm myself and those around me first. A person is a professional as long as he realizes that this is the limit, and if he crosses it he will endanger his own health and the health of others. Realizing that, after 40 days I decided that it was enough, I was already emotionally exhausted, and it was time to take a break.
When I decided to take a break from work, I joked that all my meetings were left behind. I wanted all this to end soon so that I could go to meetings, meet new people, create new relationships, new acquaintances. It seemed that all of this fell back. Maybe if everything went normally I won’t have such a demand. Restriction sharpens the perception of freedom. What was usual becomes desirable one day: just to wake up and have a cup of coffee with your loved ones in the morning. Sometimes very simple things were missing, such as the taste and smell of your favorite food, but in general, human communication was missing.
I dreamed that all this would end soon, and I would get back into my normal rhythm as soon as possible, when I could just go out and walk. 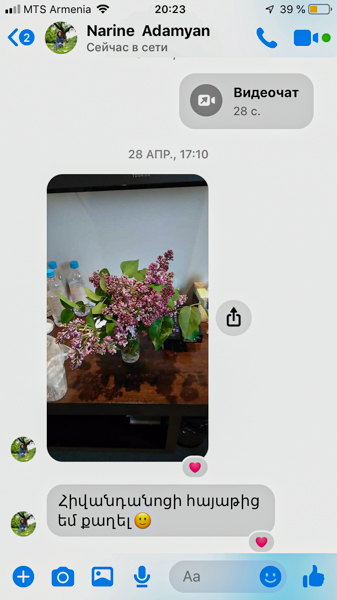 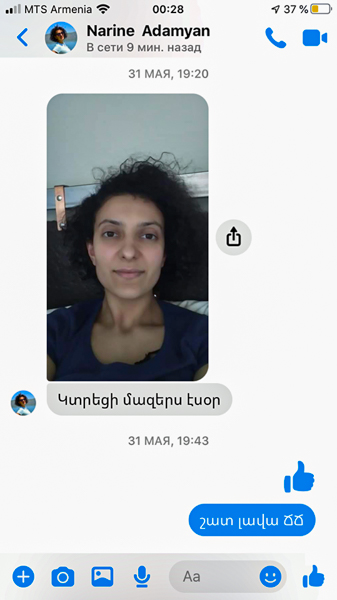 Now I try to live by the principle “here and now”, that is, COVID made me realize the transience of life: you can’t plan anything for 100%. It’s ridiculous to go to a meeting with someone and already plan your life with him: one person can’t meet your expectations. At that moment, you just try to enjoy the moment with that person, a moment of your life. But often my expectations make my life harder, my expectations don’t let me enjoy the “here and now”. I’m afraid that suddenly there will come a time when I realize that I haven’t lived because of my expectations, and that I was waiting when I should have been living.
This phase made me learn about flexibility because life is not static. One day we all woke up and realized that life was no longer the same as before. It was a challenge for everyone to see how stress-resistant, flexible, resourceful and willing to change they are. The reality we imagine can change in one day, and you must have the resources to adapt and live in change. 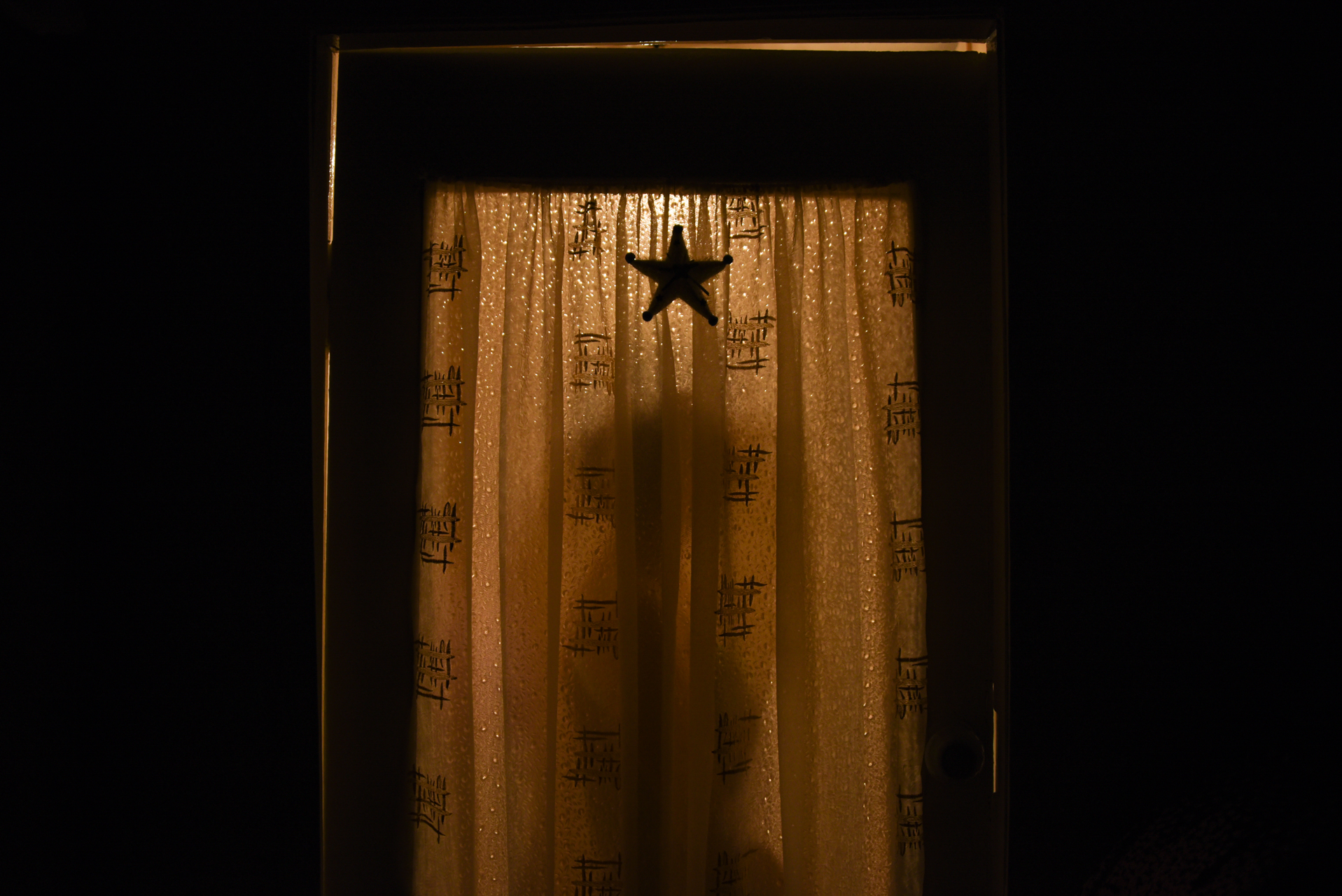 After a break, I went back to work again. At first, before leaving, I thought it would be hard and that I would wear protective clothing again, and it will be very difficult in those clothes, especially in this summer heat. Of course, it was hard to go, but when you find yourself beyond the doors – inside the hospital, you seem to forget those difficulties and you already feel at work with all your energy and strength.
There were the same worries and anxiety as the first time: you are again afraid to be infected, or to infect your close ones. The only exception is that in this case you seem to be more skilled and know more about protective means, you have better tools. It gives you as much comfort as possible in this situation.