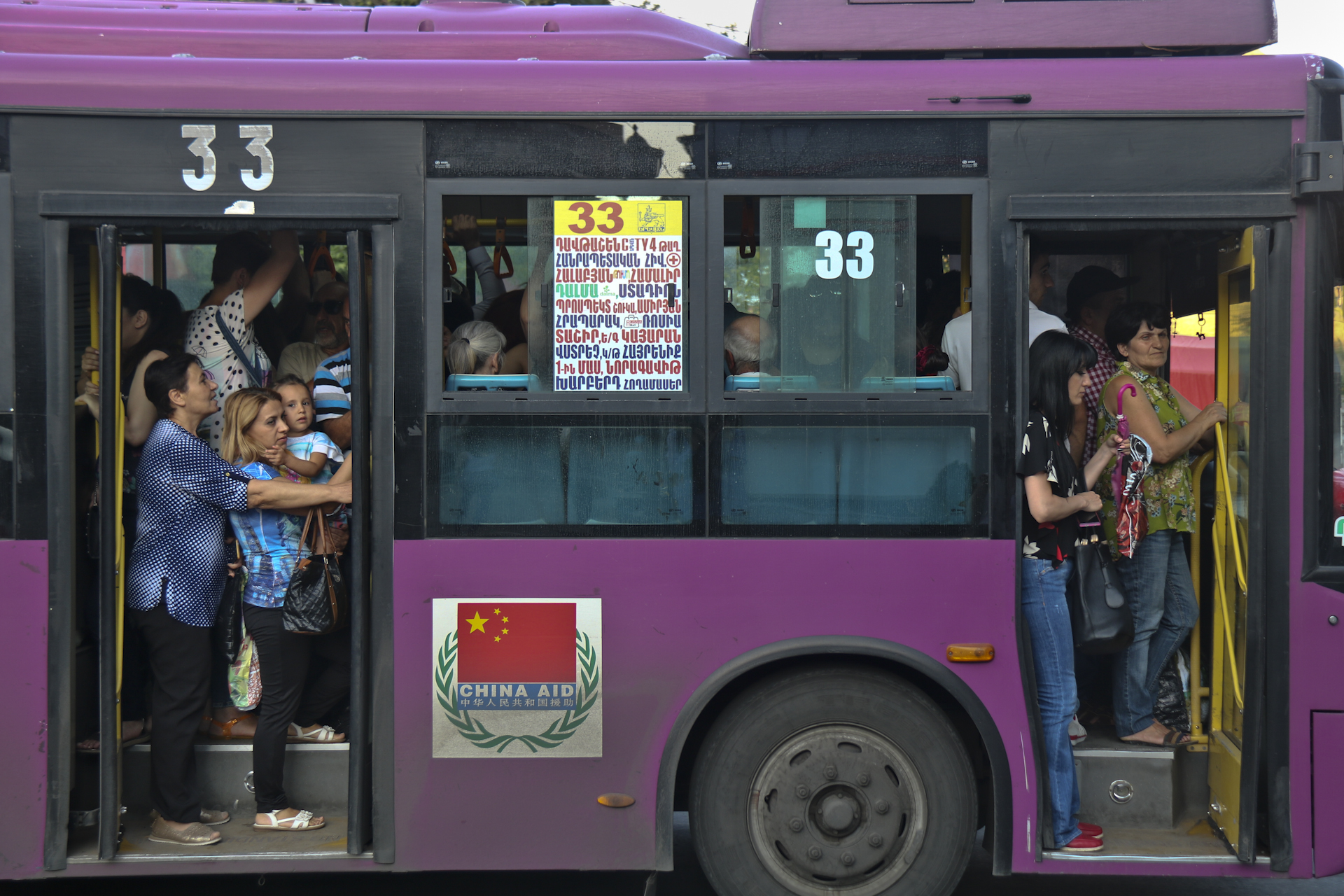 A moving vehicle, standing air, inharmonious images, a hardly grasping hand, a pressing heaviness, a sharpening denseness, an unplanned exercise of yoga with unmatchable music tunes, a driver’s gaze looking in the mirror through the smoke, people stooping and hardly fitting in, hovering over the line of intolerance and acceptance. Human nerve is being tested everyday in Yerevan public transport in the morning 8:30-9:30 and in the evening 17:30-19:00.

The problems of the public transport are like an iceberg only the peak of which can be seen. We see fully packed microbuses with 40 passengers in inhumane conditions, where there are seats only for 14 people. We see drivers smoking and even drinking coffee while driving. Sometimes we are driven in terribly dirty and dilapidated buses, and we are used to them and our thoughts for safe and civilized transportation is very often muted. The buses carry so many passengers at busy hours, that it isn’t even possible to move an inch inside it and no need even to hold from a handle, since there is no space for free fall.

In the lower (unseeable) part of the iceberg there is the organizational problem of the transport system, as well as the working rights of the drivers, their social conditions, their readiness to work in the sphere of service, etc.

The question of public transport in Yerevan is organized by the Municipality, not by the Ministry of Transport and Communication. But the government body has mere signed contracts with private companies (here comes the term of “line-owners”), which must organize the everyday work of the public transport. In the case of microbuses 39 and in the case of buses 18 private organizations are involved. I have talked to many drivers of different routes. The biggest part of them is sure that the “line-owner” is interested only in one thing – the everyday “plan” (a certain amount of money that must be paid by each driver). It varies from 6000 to 14000 AMD per day depending whether the vehicle belongs to the driver or no, also from the length of the route and the quantity of vehicles.

The 8-10 drivers of one line are being charged 12 000 AMD per day, and the monthly sum of the income gets to 3 million AMD, but the drivers aren’t supplied even with the lowest necessary conditions. In the last station, where the drivers must have the opportunity of getting some rest until the next “race”, there is not even a toilet, there is nothing mostly. When at one of our visits I asked where they see for their natural needs they said – right here, in the street. How come? Yes, they agreed to pee in the street with their backs toward the camera with just one condition – to stay unanimous.

“We work for 14 hours, from 7am until 11pm. It happens in summer months that we go home with just 2000-3000 AMD a day, because besides the daily plan given to the line-owner, we fill gas – 8000 AMD. When we complain, they say forget that the plan may go down, even in the summer when there are no students. They say if you don’t want to, do not work. We hope that the government will see to this. It would be good, for instance, if we were paid a fixed salary, and there were a bio toilet and at least a bench to sit at the last station” – says one of the drivers.

The drivers of another minibus route – number 9 – do not even have a place foreseen for their rest. Reaching to the last station at Jrvezh municipality we found out that the driver is to take the route back in 2 minutes after his arrival. There were no other minibuses in the last station, all of them were in motion. In motion incessantly, not a minute of rest.

In the line number 63 the drivers drive their own vehicles. This is the reason they take special care of the minibuses. All the vehicles that I fixed were clean. Every 5 minutes a minibus moves out from the last station at the Ministry of Defence, where there is a small stone-built hut and a bench on the sidewalk near the water fountain made in stones and seats removed from old buses. The drivers wash their vehicles 1-2 times a day, with the water of the fountain.

Especially after seeing the conditions at the last stations the electronic timetables for buses seem ridiculous at the stations of Yerevan. Most of them do not even work, they are shut down. The very few that work do not show the timetable, they show ads of a toilet paper on their back.