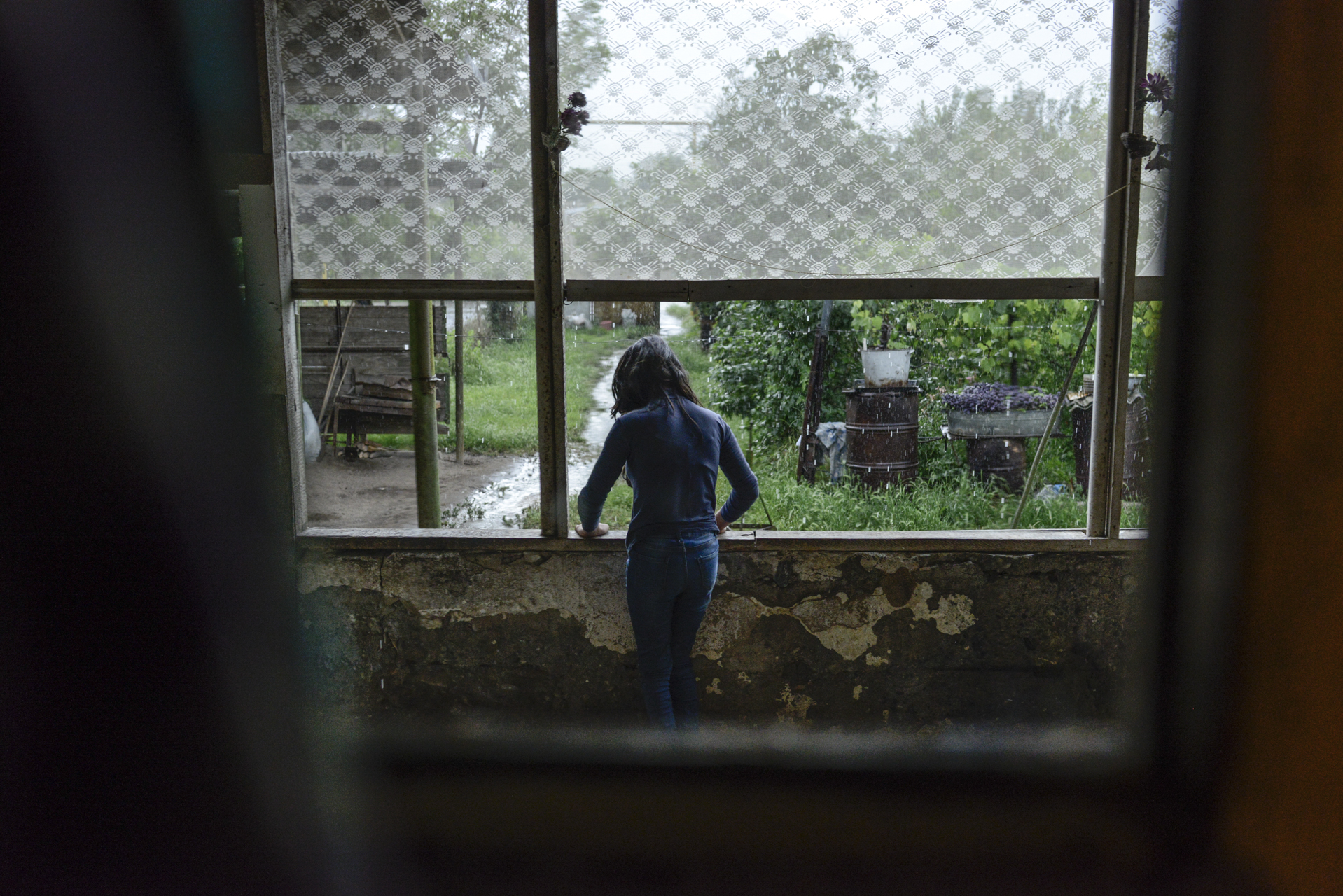 Alaverdi stayed behind. After passing the curves of the road full of pits and holes you turn left parting from the narrow highway with a light heart. The better road leads to Great Ayrum. You can guess from the name of the village that there is Small Ayrum too. That is really small: you grow assured in that when you pass the village from one end to the other. One can not say the same for Great Ayrum, which immediately spreads its broadness, where the space is full of air, where the time seems to go on in another rhythm, the light has other sharpness, the shadows get created later than in usual, which is typical of plain lands.

The same air fills the yard of Nora’s house.

The village Great Ayrum was inhabited fully by Azerbaijanis. Since 1988 the village has been inhabited by refugee Armenians fleeing from different Azerbaijani regions. Nora’s parents were also refugees trying to begin everything from a zero point in Armenia. Her father is a contractual military man at the Armenian-Azerbaijani front line. Her mother is a housekeeper with her whole household. Nora is their firstborn, they have also a son and two daughter.

When the time of going to school had arrived Nora’s mother – Naira – had to get permissions for it from the regional center and the medical commission. As she told the former law prohibited the people with disabilities to go to school. She needed to prove that the infantile cerebral palsy had not affected her child’s mental abilities. Overcoming the bureaucratic inconveniences, knocking the doors of the regional centers and medical institutions for days, collecting the necessary documents Nora was granted the right to go to school. The first two months her mother had to take her to school in her arms, when after the necessary formalities, she received the long awaited wheelchair.

Two years before the foundation “Children Of Armenia” has opened a SMART room for the children of Great Ayrum, which gives an alternative education, an opportunity of discovering one’s abilities, and an interesting pastime. Right after the opening Nora began to attend the SMART room, where she examines media literacy and English.

This is Nora Farmazyan – 17 years old. This is the first generation of the population of Great Ayrum. They are the first ethnic Armenians ever born in the village. One can say that this new generation brings a new breath, new relations to the village.

Nora is the collective image of the new generation of the village overcoming things seemingly improbable, turning dreams into reality. The proof of that is also the fact as how full her life is, although there exist difficulties in movements and moving. She has overcome her shyness of coming out of the house to attend the common school. The village school has made a ramp for her.

Two years ago, upon the opening of the SMART room, she began attending it and discovered that she wanted to become a programmist. She has also been chosen to attend the SMART center of Lori region, where everything is standardized for moving.

There are two parts in the village where Nora likes to go. The front part of the village described in the beginning of this text, where the space is different, the light is different, the shadows living their own life. And the other – the contrimage – the tailing dam with its whole reality, with active engagement of humans as a trail of a byproduct in a nature image. Nora’s not being indifferent to these two parts reveals the parallels of her own life. On one side, with calm, quiet light-shadows like a snail – an inner space of a person, from the other, an intertwined movement of expectations in a body like a tailing dam. Both of them is Nora.

Nora was late to walk… after the examination she was diagnosed with infantile cerebral palsy. When she was four she underwent a physiotherapy course in Yerevan, which she didn’t finish. The opportunity for her second treatment became possible only when she was 17. A benefactor sent money through an international organization to Nora’s family to buy a cow and to solve their social problems. The rest of the sum was sufficient for a physiotherapy 10 seances in Vanadzor city.

From Great Ayrum and back it is about 135 km. The cost of the trip and one seance of physiotherapy is 18000 AMD. Physiotherapy course helps Nora, though for getting better results she needs months of it. To help Nora you can contact us – women@4plus.org.