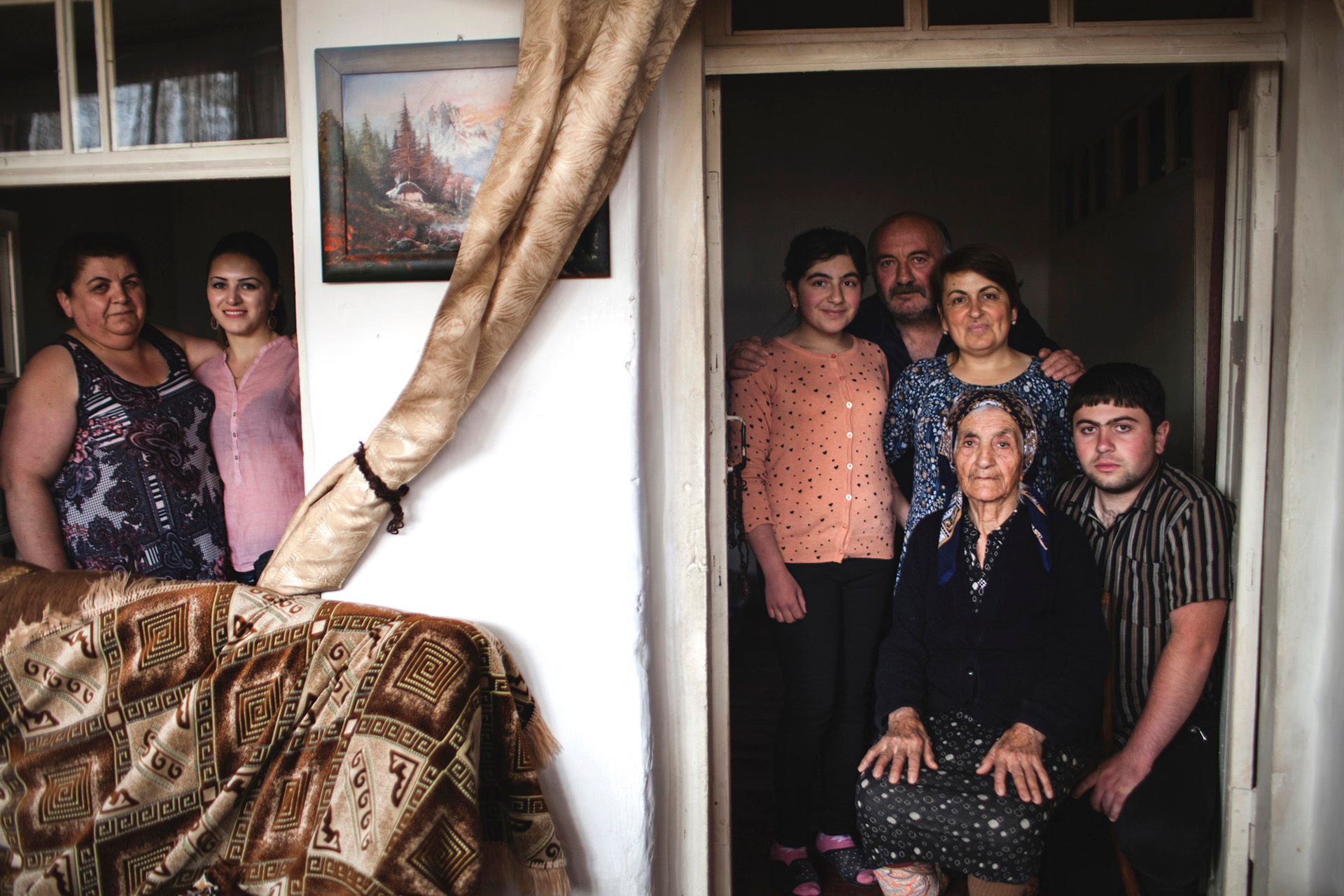 There’s a place in the world I dream about every morning, where every evening I regret not being there. There’s a place in the world where, as my seven-year-old daughter says, mommy’s grandma, who is quite old, lives. In that center of the world, the houses are so old and have suffered so many injuries from the war that they collapse into themselves, hunched, their shoulders touching the ground, and die. But even after dying, they fill the village with their presence — the dying/newborn village.

Grandma Nina, a woman with scrawny shoulders, whom I remember baking bread in the tonir (clay bread oven) with bright eyes, recounts: there were destroyed houses in the village, ruins of houses, which they repaired brick by brick, house by house, and rebuilt the village, with its three main quarters, which they gave simple, colloquial, and understandable names: Yere Quarter (upper quarter), Potuts Quarter (middle quarter), Nerke Quarter (lower quarter).

The village’s very beautiful church was demolished upon Soviet orders; according to different sources, the priest’s beard was shaved, he was made to sit backwards on a donkey and driven from the village. Whether this story is true, I don’t know. I haven’t even seen a picture of the church. Where the church once used to be is now the village club.

Naturally, it’s hard for me to work in the village — I can enter two, if push comes to shove maybe three houses a day at most. You probably guessed why: after coffee comes tea; during which time lunch is being prepared; after tea we smoothly transition to lunch; after lunch, dinner. You don’t even notice how the time has come and gone. It’s hard leaving the village: every time you return, it’s possible you may no longer see one of the beloved people of the village. The last person who passed away was Grandma Tamara. It’s good that Grandma Tamara’s stories will always stay with me. During the Great Patriotic War, all the men in Tamara’s family were taken to the army. One day she comes home, sees her younger brother is not there; they’ve taken him too. She goes and finds her brother and brings him back home.

In the village, verifying any sort of news, in general, is a difficult task, since all the stories are told in the most different ways. Those stories grow; they grown and become legends. But of course the best thing to do is go to the village elders; Uncle Leva or Uncle Pavlusha are always ready to help.

For example, I’ve already heard a few times how Uncle Pavlusha’s ancestors were dispossessed by the kulaks and exiled, how they received a letter from them that said everything is well, they only ask that they send a little garlic since there are many snakes. How they worked in the kolkhoz (collective farm). How the World War began. How the Nagorno-Karabakh War began. How he was captured by the Turks. With what tricks he managed to return to the village safe and sound. By Uncle Pavlusha’s telling, there were no Azerbaijanis in our territories; he says they were Kurds. He says when the Soviet Union was formed and Karabakh was given to Azerbaijan, they (the Kurds) were all given passports with already changed surnames and were now Azerbaijanis.

During the war, the women of our village didn’t leave the village; they stayed, to bake bread for the soldiers. The village had two tonirs: The lower tonir, which was near Grandma Tamara’s house, and the upper tonir. Women gathered around the bread rolls and talked about all the troubles of the world.

The village is one big family. People who live in houses attached to each other, families divided by a thin wall, who usually have sharp ears, in days of hardship and joy become like one cluster of grapes.

During the days of the 2016 April War, when the young man of the village were put in a car to be taken to the frontline, Uncle Giro told the driver, Valod, you are to bring them back just as you take them. Uncle Giro’s remark has become an idiom in the village.

Uncle Arshak, who lost a son in the war, knowing that now they’ve taken his grandson, collapsed into bed. One after another, Aunt Asya and Uncle Arshak die. I remember how proudly they were photographed together.

The village now gives birth to a new village, gives life to the new, becoming exhausted itself. Far from the village a new quarter is built; housewarmings are being celebrated.

With great pleasure I would tell you about Suren and Nora, Ela and Valod, Uncle Giro, my Grandma Emma, the village children, brides, Borik, Varsik, Janik, and the others, about Yeranik’s geese and Khori’s adventures. But my space really is limited. Many photos fell from the sky. Well of course for you, the viewers.

There’s no English-language expert in the village. For the children to study in English, a projector and several laptop computers need to be purchased, so that they’ll be able to do their assignments and watch English-language films. For help please contact us: women@4plus.org