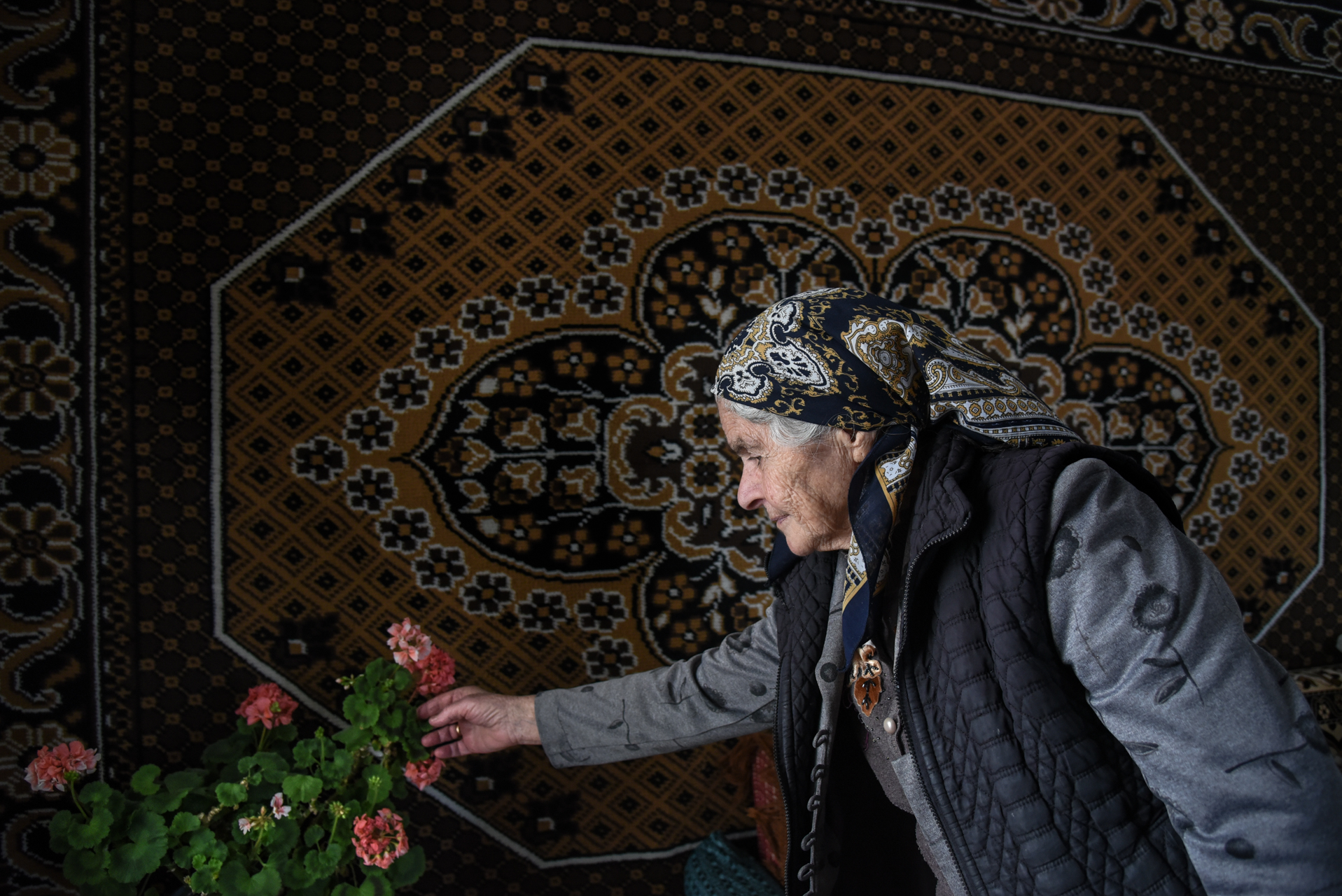 THE WOUND OF GYULISTAN: Memory

“Our house was at the edge of the road. One day I came out and saw people walking down the road to the forest, many people, as they would go to a funeral or a wedding. I asked my nephew in astonishment – what is this? He said, uncle Serozh, they have called and told to leave the village, Turks have entered Shahumyan… People were fleeing from the village. We left everything, locked the gate and went out. I took only the key with me from the house”, tells grandpa Serozh – the 90-year-old resident of the village Gyulistan, Serozh Movsisyan.

“Hours later Turks entered Gyulistan. As soon as there was a light and some movement was detected, Turks would bombard the forest from the village. And there were a lot of people there, like ants’ nest. It was a thick forest, there was no bridge anywhere, we are passing the road on foot. I had saddled my donkey and went out to the road. There was no drinking water, I stopped the donkey to get some rest, and I suddenly saw that an Armenian was up to steal the donkey, I fired with my rifle in the air and said, I am not the one to give you a “vehicle” on the frontline.

The soldiers wouldn’t allow my daughter and grandchildren to get on a helicopter, I have thrown two of my grandchildren into the helicopter through the window. A fedayi pitied my daughter, he saw that she had her baby wrapped on her and was going to faint, he said,  let this sister take her place! After that the father-in-law of my daughter called and greeted me that I could send them there.

The village was emptying, people didn’t believe this was the end. There was someone who had quarreled with his father slightly, had left him there, then the Turks had come and killed him. It’s a deep wound… There are many types of wounds on our village… I had a good Turkish friend, his name was Sepi, his son was always welcomed in our house, we have bought many nice presents for him. I can’t forget our village. You write and let people know the story of Gyulistan’s Serozh, the wound of my village….”

“When they attacked with grads, I got sick, they said it had killed a woman and a child in the yard of the kindergarten of Nerkin Shen. My daughter was in the region then, she worked in this very kindergarten. I had a heart attack, I was taken to Yerevan on helicopter. When the grad had exploded, it had cut all the electric wires, the daughters of many of our villagers were married in the region, so were my daughters, after hearing the news these poor people were suffering in anguish”, says grandma Margo – 80-year-old Margo Movsisyan.

“I was left an orphan on the day of my birth, I have never seen my dear mother. I wish I had her photo at least to see if she was as beautiful as you are, or ugly, that is what I feel pity for and miss. I placed a tombstone on the grave of my mother, when I came back from the army, it was my debt…

“Gyulistan has become a border, where no one lives, on one side it is the Turks, on the other, Karabakh… I miss our village, friends, neighbours, relatives, we are alone here. We would never think in our life that one day we have to flee. If we had the idea, would we collect so much wealth, such a house? Leave the suffering out, but the longing chokes us more, when one has six children and is left alone in the end…”

1 hour, 40 minutes: this much is needed for me to reach from Masiv to Raykom, from Raykom to Hrazdan micro and from there to the shelter of the refugees.

“Our Anna has come”, yells grandma Margo upon opening the door and hugs me. She hugs her grandchild Anna – me, I hug my grandma Bella – her. Both of us are in deep longing. I go to the dining room and see that the grandma has already laid the coffee table. I take my sit like a dear relative and begin to talk to the grandpa.

“The other day I say, Margo, if I am captured by Turks, will they kill me? She says, it’s a difficult question”, grandpa Serozh laughs and gets immediately silent. And I understand, that the longing of Gyulistan lasts not for 27 years, but for a whole life.

I ask them to tell me the story of their acquaintance and love. He says, we are together for 64 years now, which means, is there a bigger love?

“She was a pretty girl like a doll, we were neighbours, I went to the army, came back and saw she had already grown, we fell in love, we agreed and never regretted.” The grandma argues that she didn’t want to marry, she was small, in her 8th grade, she weeped so much, that on the day of the wedding she left his arm and ran home, but the godfather came and took her back.

We go to the kitchen, I hear the grandpa’s voice from the balcony, the grandma says, don’t pay attention, he sings from loneliness… Gyulistan has divided their lives between borders, and they remained in the opposite side of the border.

The grandma is interested when will their story end, so that they can let the children know to enter the computer and read about them. I say it’s almost over, you can already send the news.