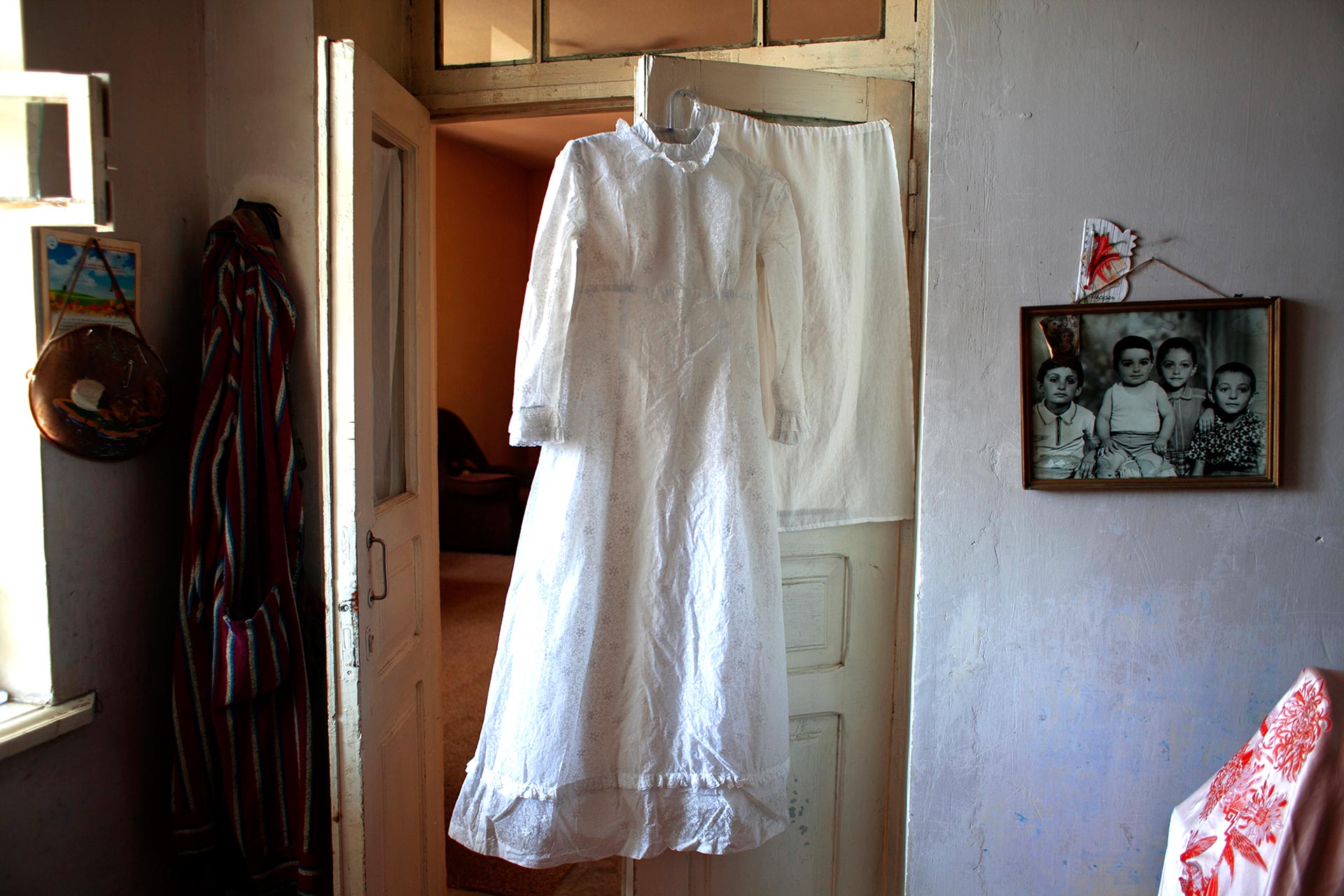 Every time when going to Katnaghbyur village (Aragatsotn region) I have taken my heavy bag of photography tools but come back without ever opening it. Shall I photograph the neighbor Arus or lie down on the bench, drink coffee with her and listen to her?

The women of our village were so beautiful in the eye of my camera. I don’t know what to say about the men, maybe they were beautiful too, but I didn’t want to turn the camera in their direction.

The route of my topic passed in 100 m radius from our house, it entered the houses of Arus,Tatev, Heghinar, Hazarvard, Rosa, Gyulvard and Lala. And this time they talked to me without codes and without whispering. I have known their stories since childhood and I even knew who was the champion of abortions: the woman having undergone more than 40 abortions was threatened by the gynecologist of the regional hospital never to emerge there again. She says “What could I do? I had a young healthy body and got pregnant very quickly” and changes the topic.

– Well, I have given birth to 5 children – 2 boys, 3 girls. I have raised them with difficulty, I couldn’t go for more.

There remain unanswered questions, but I don’t want her to cringe and I change the topic myself. Without waiting for each other, sometimes with laughter, sometimes frowning the women would tell…

– I didn’t have the right to go to my father’s place. I went to cinema with my husband once and my mother-in-law scolded me.

– They wouldn’t let me take my child to my father’s place. I would give my salary to my father-in-law and if I needed something, he would choose and buy it for me, even my underwear, and I would wear silently, even if they didn’t fit me. I didn’t have any wishes and desires, everything was as they wanted, and I, well, I would do what I was expected to do.

– The wife of my brother-in-law gave birth to a son, and my mother-in-law presented her with a ring in diamonds. Mine was a girl, and I didn’t get a present. But I knew I would also be given that gift if I had a boy.

– I was the only sister of my two brothers, and I was always sure in my life that my mother didn’t love me, she loved only my brothers. It was very painful, but I understood that she loved me after I had a child and she had died already.

Shall I ask if there were abortions conditioned by the sex of the baby? No, I the rather not. There was no Echo examination then, this will be a meaningless question, they are already telling –  people had 9-10 children then, and the boys were, in fact, born in a natural way. Thus, when there was no Echo, girls were born. Those not being born today and those being born then have one commonality – they were less desirable. The stories of the unborn are alike, those of born are a bit different.

I was the second child in the family, the first was also a girl, my brother was born after 4 girls. But I don’t think that my sisters and me were unwanted for my parents than my brother. Of course my brother was long awaited, he was expected in another way. My mother was far from the idea of abortions, she didn’t use to go to check the gender of her children, she was against abortion. My father says my daughters are generals, there has never been a difference between my children in our house.I had a dream that never realized. I have dreamt of studying always… (she is stirred up, can’t talk), it just didn’t come true… I am very content with my family, I am happy, only that one is my unended dream. Now I think at least my children get education, I consider it very important for my children to study, what I couldn’t make I want them to realize.

[Audio]They were out of their minds for the boys – my mother, my father, the grandmother, the grandfather. They would not exchange the head of their daughter with the nail of the son. They loved their boys very much, especially my elder brother. My elder brother was named after the father of my father and that is why they loved him a lot. Until his 7-8 years my grandmother would keep him wrapped on her back, she would even work in the garden with him on her back. They wanted many children, girls and boys, a 1000. My father was the only child surviving the genocide, that was why they wanted many children. When I married and came to this village, I was 17 and was blaming my parents a lot. I didn’t know what difficulties I could have after my marriage. In our village – Udjan – it was ok, though it was a village, it was not as conservative as it is here. You had to watch out every minute not to make a mistake. The first years of the marriage were very difficult for me. For example now, when my daughters-in-law want to go somewhere, they tell their husbands and then just keep me informed – mom, we go to this place. Ok, go, bye. We didn’t have the right of a word. When I wanted to go to our village Hrant, he would tell me to ask his mother, I asked my mother-in-law, she would tell me to ask my father-in-law, and that would mean I had to prepare 10-20 days prior to go to my father’s place. That was why I wouldn’t turn to them and wouldn’t go anywhere. But when I went somewhere, my father-in-law was very attentive, especially when I was pregnant, he used to help me to sit in the front of the car. They were attentive, but didn’t like that I went to my parents’ place. Everything was to their liking then, they would tell the size, the width of my clothes. My father-in-law used to buy the clothes and I had to wear them. I used to give my whole salary to him, that was the way. I haven’t even thought then to say anything, to complain, it is just now that I think how I beared all that.

[Audio]There were 8 children born in our family – I am the 4th, 6 sisters, 2 brothers, one more brother had died in a very young age. Well, people wouldn’t have less than 7-8 children back then. They wouldn’t look if they were boys or girls, what God gave, that they tolerated. I married in 17, well, it was my destiny… My husband Kerop’s father had gone to the war and never returned. And my husband was the only son, the whole village wanted Kerop to have many children, boys, which was very important. After the first 2 of my daughters they wouldn’t accept me any more, they used to say “she delivers girls like her mother”. But later, when my Serob was born, everyone was very happy, they worshiped Serob, he was named after his grandfather. Is there a mother who treats her children differently? A mother-in-law, a father-in-law would treat them differently, but not a mother. I didn’t, on the opposite, I have loved the girls more, because we give them to other people, I have pity for them.

[Audio]Well, back then it was different, all the daughters-in-law had to take a dowry with them. I remember when my elder sister married my mother went to Moscow or Leningrad and brought many things for her dowry.  She had brought for me and my sister. She put a lot for my sister, what remained was for me. Everything was important, it must be, it needed to be exhibited. The much the dowry, the better. But how difficult it was to collect all the staff for the dowry, my mother had even kept things from her dowry for us. She put towels from her dowry for me and my sister as a memory. Well, we brought all that, some part we used, the rest I pitied to use. I thought about those hard years, that my children would grow, use them. But while they grew, a lot changed, the fashion changed and they didn’t need it. But, all the same, I keep them, no one needs it, but as I know with what difficulty my parents made it, I can’t throw them away.

[Audio]My mother has had 10 boys, 3 girls. All 10 of them had died, one of the girls with the name Hazarvard born before me had died too. When I was born my mother was very happy. After the death of my mother, when I was 1,5 years old, my father married for the second time. His second wife had a daughter and a son with her. My father had 3 more daughters and a son with his second wife. 2 of the girls and the boy died, only one girl was left. We became 3 sisters. My father used to say that he had 11 wounds in his heart. He counted only the boys, he had lost 3 daughters, but he used to count only the boys.

[Audio]It was usual in our family to be born either a boy or a girl. One of my brothers has 3 daughters, 1 son, the other 2 girls, 1 boy. I have 2 sons, but I would love to have a daughter too, but no, what can I do? Doctor Narine who was next to me during my labor was surprised that I was in a bad condition because of giving birth to a boy, I wanted a girl. Well, yes, in our Armenian families we appreciate boys first, but it was not like that in my family. My father never treated me and my brothers differently.

There is a high index in the preference of male children in Armenia. The researches of the last years witness about the high rates of abortion conditioned with the preferences of a baby boy. According to the data of UNFPA 1400 girls are not being born in Armenia yearly. 100 girls against 115 boys, which has become the reason of an uneven proportion.

In 2016 there was realized a jurisdictional change. RA law defines that every woman has the right of pregnancy artificial termination (abortion) until her 12 weeks date.The roots of this phenomenon are deep and are conditioned by the cultural notions. They dream about a boy in the families for different reasons – for providing the continuation of the family, for having a stable economic growth, etc. The preference of boys is considered the consequence and the result of not fully evaluating women and girls. And the pregnancy artificial termination conditioned with the sex of the fetus are a kind of violence that is carried out both against the unborn child and the woman carrying that female child. And this, in its turn, affects the status, the authority and the comprehension of women’s abilities. According to the researches carried out by the organization World Vision in 2016 the most conservative results were registered in the regions Aragatsotn and Gegharkunik about the relations of man and woman and the preference of boys.