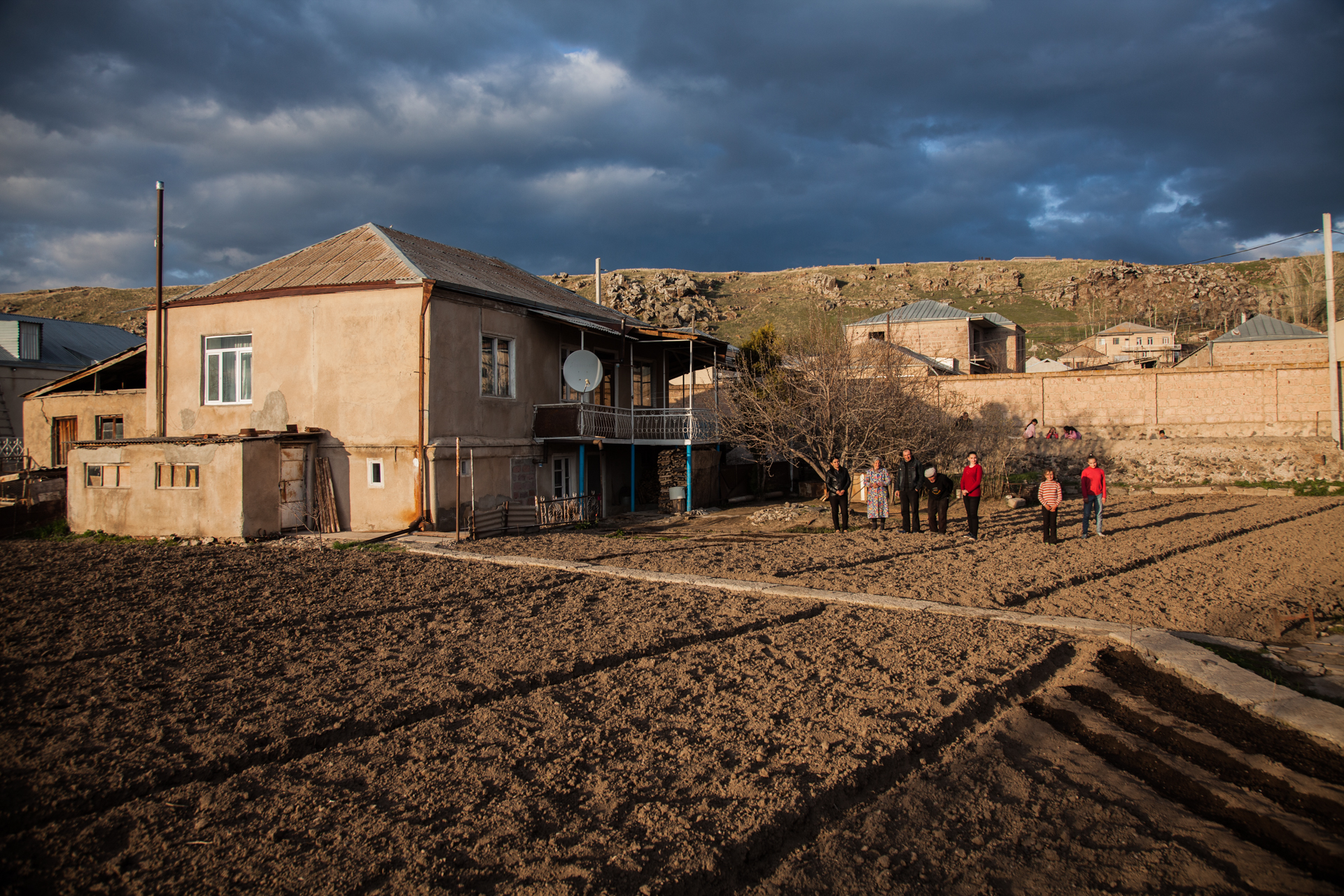 In 1992 some news arrived to the village, that the residents must be evacuated. They already knew in the village what had happened to the Armenians in Baku. They also knew that Turks had already entered Shahumyan. They often threw leaflets from airplanes “Don’t leave the village, stay with us”. But people of Talish knew Turks very well and understood, that this was a regular trap of Baku. And the Russian army was bombing in the mountains to spread fear and panic.

Borik and Araksya Khalapyans lived with their four children in the village of Talish in Martakert region of Mountainous Karabakh.

On June 12th the war reached to Talish.

“I asked for a cart from my neighbour, sat my mother on it, took my two small sons and fled from the village,- tells grandpa Borik. My elder son was in Yerevan with my wife and his family. My mother was very afraid of the Turks, and I supported her with the words – don’t be afraid, we will live together and die together, whatever we do, we’ll do together. Thus supporting each other we reached to the neighboring village of Maghavuz. I had been able to take just a soft blanket from home to cover my mother. When I settled them there, I decided to go back home to take some flour not to die from famine. I returned with my little son. The village was still calm, there were many people. I entered my house, took a bucket of flour very quickly, buried several eggs in the flour, took some pots, plates, spoons, and we went out.

We were running to cross the road to enter the woods, when a truck passed by us like a wind. The driver just managed to call out to us to run quickly, the Turks had entered the village. We ran, I left what I had in hands at a house and told my son to run without me. Shootings were already heard from one side of the village. The child ran away, and I, collecting myself somehow, falling and standing reached to Maghavuz. My little son had already reached to my family. I came and saw them waiting for me with a donkey. We fled again. Through the woods, through other villages we reached to Metshen, then to Yerevan, from there to Gavar. In Gavar we learned what had happened to those people, who hadn’t managed to leave the village. They had stripped one woman naked, forced to walk in front of the village, then had raped her, then murdered. Some were lost without a trace.”

In Gavar Borik found a guard’s job with the help of his acquaintances. Three years later his sons were conscripted to the army. His younger son was sent to Martuni, but his middle son Arthur decided to serve in Talish. In 1995 the whole family returned to Talish.

“As soon as we entered the house, I ran to my tonir (stove) to see if the wheat was still there or no,- recalls grandma Araksya,- but I didn’t find anything besides the blanket I had covered the wheat with.” The houses of Turks remained in the neighboring village. Khalapyans reconstructed their house by the construction material of those houses. Though everything was ok, but grandma Araksya always had a fear inside her. Her one ear was on the pillow, the other – outside.

In 2016 April 2nd, at 3 o’clock at night the family having been wakened by an explosion already knew that the war had began. “We were calling each other’s names in darkness, there was no light at home,- tells grandpa Borik,- we had no time to prepare. We managed to wear some clothes, to take some documents and again, this time forever, leave our house. The whole village was being bombarded, no matter how you ran, it was pouring like hail, greens, trees, houses. We somehow managed to reach the house of our neighbour on the gorge. Upon leaving the house, it would explode again. It was very cold in the morning. Arthur went to find a car, he didn’t know that the Turkish saboteurs had already entered the village. He came back without car, lost in mud. He told that he had entered the house for his charger and cigarettes, but when he left the house, a bomb exploded right next to him. ”

He told we needed to run, who escaped to life would live, who died would be dead. We were running without looking back, without understanding where. Suddenly two cars blocked our way and stopped. Some officers got out and walked towards us. Trembling from the cold and fear we thought they were Turks. I couldn’t swallow my saliva because of my fear. I thought the end of my children was near. I turned back to call out to run, when one of them told in Armenian don’t be afraid, get in the car quickly. Tears were running down my eyes, I wanted to kiss those guys. They were our Armenian soldiers. We reached to Yerevan half of the road on foot, the other half by car, then went to Gavar. On the road we saw burnt down houses, killed animals, and I was asking God to save the life of my children.”

Now Khalapyans live in the village of Karmir of Gavar region. They have no jobs, they live by the allowance of the children and the pension of the elderly.

“The soil of our house was soft, you didn’t even need to water it. But the soil of this village is stoney, you must clean it from stones and water all the time. There is no rain here. When we began to clean the soil, we found so many things. In Talish we had mulberry and nut trees, we used to make vodka, jam and doshab. But here we have one plum tree. Talish villagers had given a name to their village – “Khaniga” – which means khan’s wealth.We used to burn wood, but here we use cow dung, which we used as a fertilizer in Talish. In this house I don’t have the necessary facilities, even to build a tonir, but in Talish I had a big tonir. I used to bake zhengyal bread (bread with greens), ordinary bread. Talish is the repository of bread of Artsakh…”, recalls grandma Araksya.

Grandpa Borik tells “There was no such diversity of weapons in 1992, and there was no aim of killing too. They just wanted to conquer the territory, that is why they took us out of our village. But in 2016 they had the aim of exterminating the villagers and then own the land. But the villagers ran on time, like us, only three stayed, didn’t live the village. Later we learned what ferocities they had done with them. They had shot the bedridden grandmother into the mouth, raped everyone, severed their ears and tongues, done so many inhumane things and left. The ones murdered were from our family of Khalapyans.”